Here’s a post from May 2014 to show the kind of analysis we’ve done in the past:

Long before Chris Paul fouled Russell Westbrook on that 3-point shot with 6 seconds remaining last night that helped the Thunder cap off a big comeback, there was lots of chatter the past couple of weeks about the seemingly inordinate number of shooting fouls on 3-point attempts (and “4-point plays”) in this year’s playoffs.

We decided to look into this further, get more concrete numbers, and compare the numbers to the same point in last year’s playoffs. The difference is startling. We also went a step further and identified names of shooters and referees involved to provide further context.

In the 68 playoff games played through Tuesday, March 13th, NBA referees have called 61 shooting fouls on 3-point shot attempts, compared to only 33 through the first 68 games of last year’s playoffs. This is an 85% increase!

From the 61 fouls called on 3-point attempts during this season’s playoffs, 21 were “4-point play” opportunities, meaning the officials called a shooting foul and the 3-point field goal attempt was made.  Fifteen of these 21 were converted into 4-point plays, while the ensuing free throw was missed on the other six.

In contrast, during the first 68 games of last season’s playoffs, only 6 of the 33 shooting fouls called on 3-point shot attempts resulted in 4-point play opportunities.  Five of the 6 were converted after the ensuing free throw was made.

Here’s a breakdown of the players who have been fouled on 3-point attempts this season, followed by a chart from last season’s playoffs after the same number of games played (68): 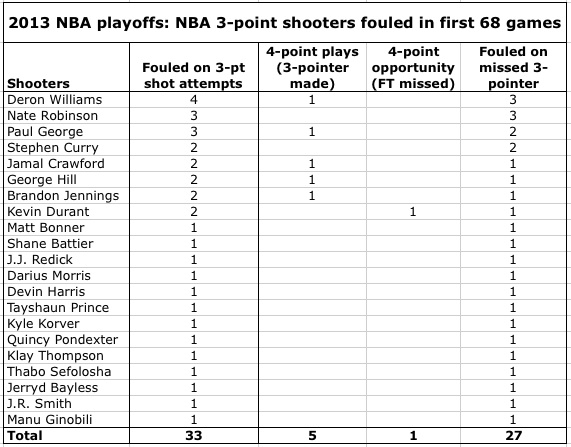 Although you would think it may be alarming to see such a large increase from one season’s playoffs to the next, we don’t think it’s a bad thing.  In fact, we think officials haven’t been calling enough fouls on jump shots based on our research over the past three seasons.

Thankfully, this season the NBA came out with new detailed guidelines on what constituted a shooting foul when contact was made on a shooter’s arm or hand, and to their credit, the officials have been enforcing them much more consistently.

There may be a reason why the league came out with these more specific guidelines this season instead of previous seasons.  Since we’ve reviewed video of every shooting foul over the past three seasons, we noticed there were huge discrepancies among referees in the type of contact they allowed on shooters’ hands, arms, and wrists, especially on long jumpers like 3-point shot attempts.  We scoured the rulebook for guidelines on the type of contact that was allowed on a jump shooter’s hand or arm, but there really wasn’t anything specific.

As a result, it seemed to be very subjective and was left up to the referees to decide on their own, which obviously wasn’t good since rulings were all over the map.  Even when you listened to television announcers analyzing this contact on video replays, some would say the contact was a foul while other announcers seeing the same type of contact would say it was legal.  What a mess.

After noticing these discrepancies in how referees called these kinds of shooting fouls, but with the lack of guidelines, last season we sent emails to the NBA league office asking for clarification through a new fan feedback email address they made public (here’s a link to our email text, if you’re interested).

We were pleased to see the league this season produce more specific guidelines, as described in this NBA memo.  We don’t know if we were a catalyst to having this change made (since it had gone on for years without anyone really talking about it), but it doesn’t really matter to us as long as they addressed the problem.

Although there’s been an increase in the number of shooting fouls called on long jump shots because of these guidelines — and it has been a “point of emphasis” with the officials this season — we think it was the right move to make.  Too many times in the past we believe officials allowed too much contact on long jump shots, and the league has finally cleaned that up.

Referee subjectivity is still a factor:

All this said, we still see too much subjectivity being applied with these new guidelines.  For example, we see fouls called when incidental contact occurs on the shooter’s hand during the follow-thru, which is allowed according to the new guidelines.

In addition, as TNT analyst Steve Kerr mentioned in last night’s Clippers-Thunder game, we are seeing many players flopping and/or “selling” contact when very little contact occurs, or none at all.  We think the new emphasis on referees calling fouls on contact is motivating the players to use it to their advantage.

For example, from the 61 shooting fouls on 3-point attempts called during the current playoffs, we reviewed the video on all these plays and determined using our judgment that 17 of them were wrong or questionable calls, including 8 of the 21 four-point play opportunities.  Several fouls were called after the shooter fell unnecessarily hard to the floor, twisted their body in mid-air after no contact, intentionally missed their shot badly to make it look like their arm was hit hard, etc.

For these 17 wrong or questionable calls, the officials who have incorrectly called more than one are the following:

If you remove these 17 wrong or questionable calls from the equation, then the adjusted total of 44 fouls called (reduced from 61) is closer to the 33 that were called after 68 playoff games last season (not taking into account wrong or questionable calls from last season when there were really no detailed guidelines).  So instead of an 85% increase from 33 fouls called during last season’s playoffs to 61 called during this season’s playoffs, the adjusted increase would be 33% (33 to 44).

One thing is for sure, though.  We aren’t alarmed by a 33% increase since these guidelines and consistency were way overdue.  But we are concerned that players are flopping more than usual now that they know they can be rewarded for it, and some referees do buy it.  At least we think they got the call right last night (to Tom Washington’s credit) when Chris Paul made contact on Westbrook’s elbow last night on that 3-point shot.  In previous seasons, that contact had a higher chance of being blown off by referees and announcers.